I met Laurenz on a small side street adjacent to the 405 Freeway on the outskirts of the West L.A. VA. Sitting on his makeshift bed he welcomed me with a big smile. I ask him “How are you doing today”? “If I said great, I’d be lying” was his response as he brushed that off with a full on belly laugh. Proudly, he states that he is a Veteran though his situation has nothing to do with it.

Originally from Kinloch MO, he lets me know that it is one block from Ferguson. He is bothered by what has been going on with racial tension. “God Bless the young people over there as they feel for the old people who have stepped over a lot of stones for a long time now”. He tries to find the right words to share his feelings. “It’s not the principles we are fighting for, it’s the overkill”. He tells me” At this stage of my life, and my age does not matter, I don’t know whats going on, and how it will end”.

“I try to be humble, passionate and show my love for my black people as well as the white people, Amen, because that’s what it’s all about. I’m sorry, but I don’t give a damn if it’s black or white….it just IS”.

He asks to communicate with all, otherwise we are segregating ourselves from others. That is the lesson he wants to relay.

According to Laurenz and his friends, they live “At Large”….he does not like the “H” word. 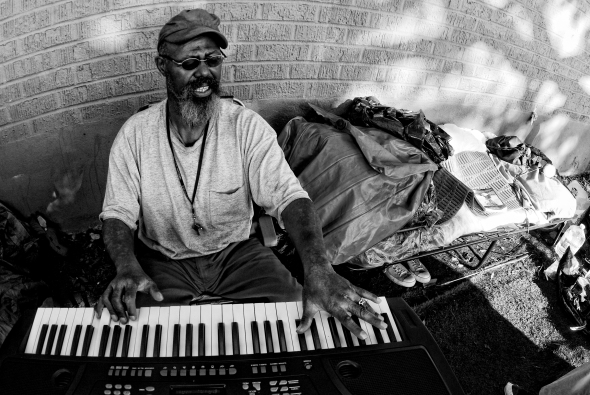 04 Dec This entry was published on December 4, 2014 at 3:32 pm. It’s filed under Portraits, Uncategorized and tagged Attitude, Happy, Homeless, Laughter, Life, Music, Photography, Portraits. Bookmark the permalink. Follow any comments here with the RSS feed for this post.