It would be an understatement to tell you that I did not learn and enjoy the lessons spoken from the lips of this man.

Sitting on a bench on a deserted day in The Arts District of Los Angeles, I see a man, alone in his thoughts. Approaching him with an extended arm, he reaches for me, his hand greets mine in a firm yet welcoming manner. Little did I know at this point how entertaining and knowledgeable he would be.

Jokingly introducing himself as “A Bum”, he tells me that he is a magicians first-born son and that he belongs to The Magic Castle. “No, I’m not kidding you” he says. “I’m here in Los Angeles and am trying to get to Hollywood and The Magic Castle. There are so many movie stars and men and women who have been waiting to meet me because I’m the one who kept The Magic Castle alive”.

According to Mike, he’s been out here “a long time”. “I don’t like to say how long..I know the informative years, but I don’t like talking about it”.

“I’m just trying to do the best that I can”.

His eyes light up and he is full of excitement as he continues to share his thoughts…”Besides Jesus” he tells me, Dr. Bob and Bill Wilson are Saints. I know about them…they were our New Testaments. They were the Saints of Modern America, let’s put it hat way”.

“Nobody can beat Jesus…that’s it…I’m all done. Nobody can do it! I tried and I failed. I thought that Jesus was some sort of joke but, it’s not! God himself came down here to be a human being just like you and me and everybody else. Man, if you can’t believe in him then there’s really something wrong with you” as he points to his head and then his heart. 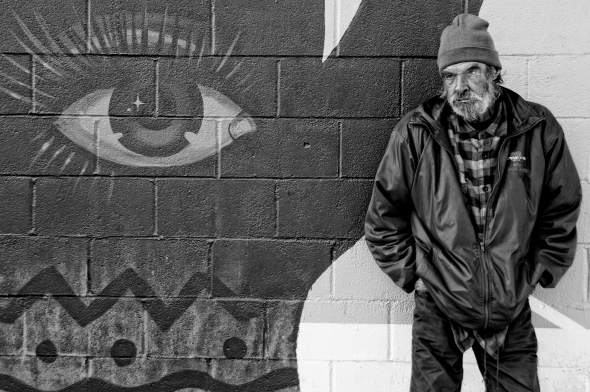