Wallace tells me that he is a lucky man. And it shows.

“I have Cancer, and just had an operation for a bleeding ulcer. I got lucky and there is a 40 year general surgeon. I never had me a surgery in my life, and he did it! He took care of everything, and put a bag on the side of me to drain the poison from going in my lungs”. He adds “he did a good job”! I didn’t have to pay anything for that. The only thing I paid for was when I crawled on the ground to get an ambulance, I asked this guy to call 911. I had $4.00 and gave him $2.00 to call them, but he ran off to buy a beer. By the time I got to Good Samaritan Hospital, the Doctor said we had to operate immediately and that I had only 3 days to live”.

“I was a disobedient child to my Mom way back in North Carolina. We owned 280 acres of cotton, tobacco and wheat. You see, there are two things in the bible…a disobedient child and a self murderer, these are hard to be forgiven by The Lord. I’ve been punishing myself for 40 years because of that. I can’t remember how old I was, but it was in 1975 that she threw me out of the house for selling weed”.

” I’ve been on the streets ever since”. 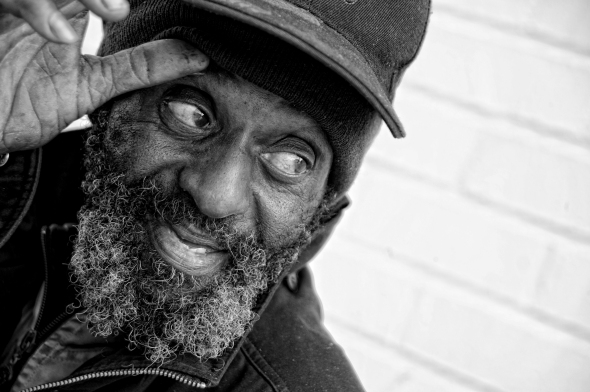 09 Jan This entry was published on January 9, 2015 at 9:59 am. It’s filed under Portraits, Uncategorized and tagged Black and White, Food, God, Homeless, Hope, Life, Los Angeles, Mom, Photography, Portrait, Sad, Wisdom. Bookmark the permalink. Follow any comments here with the RSS feed for this post.