“Is Tupac Shakur dead or alive?” I say, he is dead. He was shot in Las Vegas years ago. “Are you sure?” he asks? “there’s a guy running  around here who looks just like him”.  I assure him, that it is not Tupac.

This is how I met James.

It was 40 years ago that James left his hometown of St. Louis to the warmer surroundings of Southern California.

He has been living on the streets ever since.

He is constantly looking around and pointing out his many friends who he shares these streets with. He is content and wearing a smile as he greets them. One lady passes us quickly, and James tells me who she is and that “she has two kids by me”. “Twins” he says. He has never seen them but it was from the period he was in “Frisco”. He thinks that now, they must be 28 or 30 years old. A boy and a girl. He is due to meet them soon he says “she just told me about them”. “I’m going to be 70 this year…something like that?”

I ask him what is he grateful for today. He tells me “to see her”.

He continues to point out people to me, and share their stories…from the cop he claims first arrested him in St Louis to the celebrities he sees visit the streets here on Skid Row. The stories are plentiful.

“What advise would you give to kids today?” I ask him… His answer surprised me. “Find a city that nobody knows you” he states. “The Street People will keep you from the gang thing, as they did for me in Frisco. They kept me out”. 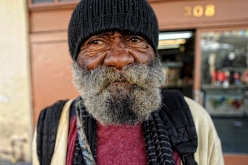 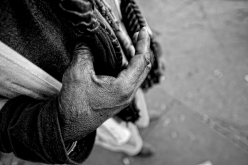